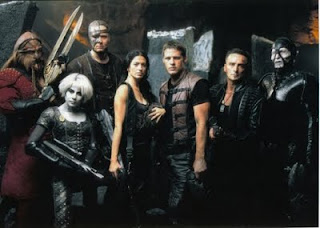 A few months ago, I was desperate for some really good sci-fi. I scoured the internet looking for a trace of some new space age adventure to lose my imagination in. I found a few good ones like Dark City and Gattaca. At the time, neither was streaming on Netflix and my local video store didn’t have them in stock, so I never got to see them. I became dismayed, but then, a friend of mine recommended Farscape, a sci-fi TV series that initially aired in 1999. I saw an episode or two when it was still on the air a long time ago and thought the show was goofy and weird. My friend insisted it was worth a gander, especially when starting from the beginning. I began watching the show on Netflix, and although the show was indeed goofy and weird, it was still impressive.

As the show went on, the goofiness faded and the show became, potentially the best science fiction television series of my generation. The writing was smart and sophisticated, but not without an irreverent sense of humor (“Where’s my damn ice cream?!”). The heroes were complex, deep, and flawed. The villains were not always so evil and often times had a very grey morality, rather than black. The plots were mind bending and virtually every twist was completely unpredictable. The series introduced concepts that I have never seen before or since in any science fiction. Needless to say, my mind got frelled the dren up regularly watching Farscape as there was always some new H-Bomb of a revelation or malignant plot tumor to be discovered. The show was written, acted and executed flawlessly. I tried to write a review for the series, but at around 9 pages of me basically saying, “This show is frelling awesome,” I opted against it.

Sadly, Farscape was cut down in its prime, like so many excellent sci-fi series before it. With its end, plots were left open and the series felt unfinished. Farscape was supposed to have a five season run before it ended but was cancelled after four. Brian Henson, son of the late great Jim Henson and producer of the series, was not done yet. He wanted Farscape finished properly. And so, The Peacekeeper Wars were born.

Over the course of Farscape, John Crichton and his companions amassed a substantial amount of fierce and unrelenting foes, many of which actually joined him as allies on many occasions. Some of these enemies were Scorpius, Crais, the Peacekeepers and the most devastating enemy of them all, the Scarran Empire. The Scarran are a vicious, brutal and violent race that wants nothing less than to conquer the whole galaxy under the rule of their glorious empire. Their fleet dwarfs any in the entire galaxy. The only fleet remotely large enough to even stand a chance is that of the Peacekeepers. As established in the series, a war between the Scarrans and the rest of the galaxy is brewing, and in PK War, it’s finally arrived. The Scarran fleet goes on a rampage throughout Peacekeeper controlled space, wiping out all resistance. It’s the last war of our time, and the Scarrans are winning. The galaxy is in peril, and only one man has the ability to stop them: John Crichton. Crichton was given knowledge in season 1 to unlock the secrets of wormholes in order to find his way back to Earth. But with this knowledge comes power. The power to create, and the power to destroy. The knowledge in Crichton’s head can be used to create a wormhole weapon of immense power. Scorpius, Crichton’s arch-nemesis, occasional ally, and general pain in the eema wants nothing more than to wipe out the Scarrans for good. The wormhole weapon is the only way, but Crichton knows the cost of such power. There must be another way, right?

Farscape: PKW continues its tradition of delivering an epic and exciting story full of twists and turns. The characters are just as awesome as they were before, and each one of them has their own character arch. The story is more epic than it has ever been and the stakes are at their peak. The battles to come are dangerous, and the body count is sure to be high. The acting is, as always in Farscape, above the curve. Ben Browder is a master of the zany antics that Crichton is known for, but he also handles the emotional beats and angst better than most actors. He has a lot of range and captures every aspect of John Crichton, from his sarcastic whit, to his mental breakdowns, with incredible deftness. Claudia Black plays Aeryn Sun, one of science fiction’s sexiest bad asses. I love Claudia Black. A lot. She quite possibly has the sexiest voice in the entire world. She is also an extraordinary actress, one who I never thought ever got the credit she deserved. Black is certainly one of the stand out members of the cast playing the ex-Peacekeeper. Anthony Simcoe plays the big brutish softie, Ka D’Argo. D’argo has always been one of the most tragic characters in Farscape, having been unjustly imprisoned for 8 cycles for the murder of his wife, for which he was framed by his brother in law (a total son of a hazmot). His son betrayed him, his girl betrayed him. His whole life has been one crushing disappointment after the next. D’argo is the ultimate warrior, and his story comes to an epic conclusion in PK War, much like the rest of the cast. Scorpius is as scene stealing as ever, with his cold and calculating demeanor. Even after all of these years, you still don’t quite know if he’s a good guy or a bad guy.

One of the best parts of PKW is that it always has time for those emotional moments. Crichton and Aeryn’s unborn child becomes an anchoring point for most of the drama. Crichton is no longer thinking about just himself, or just him and Aeryn. He now has a child on the way, and the ongoing war threatens to destroy his family. There is loads of drama to be had, obviously. Each character has time to develop and change over the course of the story, most notable in this is Stark. Stark was unfortunately absent throughout most of season 4, so seeing him as one of the main event characters is most welcome.

PKW does have some flaws. Since the writers are essentially condensing an entire season’s worth of stories down to a 3 arn movie, the pace is often a bit jumpy and inconsistent. A lot of moments don’t simmer on screen to achieve the full effect they could have had, particularly in some would be emotional moments. Much of the story seems rushed, but not too badly. Some main characters seem to be ushered to the background, like Noranti, Jool, Sikouze, Pilot and everyone’s favorite Dominar, Rygel XVI. It’s unfortunate to see these characters get so little screen time, but it’s impressive that each character still has integral roles to play in the story. Quite possibly the biggest problem this movie faces is how utterly predictable it is. I knew all the plot twists about the time they began to set them up. I knew some of the twists even before I saw the movie just by guessing. This was an extreme shock to me as Farscape has always featured the most unpredictable stories in television (at least in my opinion). There are still plenty of those shocking moments, and more than a few signature bomb-drop-revelations, like the origins of the Peacekeepers, but overall, too predictable. An average movie could have gotten away with it, but as I said before, Farscape was always way above the curve.

Even with its flaws, Farscape: Peace Keeper Wars ends the series on a very high note. They close most of the important plot lines, while still leaving others up in the air, just in case. All of the characters develop and even though the movie is bursting at the seams with high velocity action, the story does not skimp on those precious emotional moments. Even if the end would have been better told through an entire season, Peacekeeper Wars is nearly as good. It’s rare to find such a quality series, whether it be sci-fi or not. Farscape is a rare breed of a show that never got boring or repetitive, always pleased, and made sure we loved all of the characters. This movie is no different.

I give Farscape: The Peacekeeper Wars a frelling 9 out of 10. I just can’t get enough of this dren.

Just as good as the series it’s based on

Exciting and epic close to a great series

Impressive visuals, despite its fairly low made for TV budget

Story is rushed, though understandably so

Some main characters get less screen time then they deserve

Plot is relatively predictable. Disappointing considering the unpredictable nature of the TV show

What’s with the bright colors, new make-up and weird voices?

Farscape is an Australian-American science fiction television series filmed in Australia and produced originally for the Nine Network. Its amazingly hilarious and insane show.